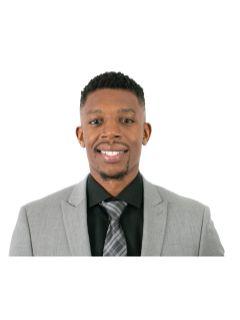 Your Olympian Realtor … Calvin Smith II is a Tampa Bay native born and raised. He graduated from the University of Florida with a degree in Sociology. While in college, he ran Track & Field, where he made the Olympic Team as a Sophomore for the 2008 Beijing Olympics and ended his athletic career in college as an 18x All-American (most in school history), SEC, and NCAA Champion. After college, Calvin went on to run professionally. He won Gold Medals in the relay at three consecutive World Indoor Championships starting in 2012, with 2014 being the one where he broke the World Record in the 4x400 relay.

Besides running, Calvin likes to cook, travel, and try new foods. He'd love to help you achieve your real estate goals and make the most of today's real estate in an ever-changing climate. Calvin will work just as hard off the track as he does on the track to make your real estate dreams come true. He's "Your Olympian Realtor"!

About CENTURY 21 Beggins Enterprises: Headquartered in Apollo Beach, Florida, CENTURY 21 Beggins Enterprises was created in 1992 and now operates ten offices surrounding Tampa Bay in Hillsborough, Sarasota, Manatee and Pinellas Counties. Named Innovative Leader of Technology by Florida REALTOR® Magazine, the company's 400 affiliated agents specialize in residential real estate. The full service brokerage has also been named one of the Top 100 Places to work by the Tampa Bay Times for ten consecutive years and is consistently ranked in the top 25 CENTURY 21 firms in the world. CENTURY 21 Beggins also earned the coveted 2014 CENTURY 21 Company Technology Award. This award is presented to one company in the CENTURY 21 System (6,900 offices worldwide in more than 78 different countries) that is intensely focused on technology in support of the success and growth of their business.

With the mantra, Empower, Educate, Encourage, the agents of CENTURY 21 Beggins are specifically trained to deliver on proven systems that Empower good real estate decisions while Educating consumers on the complexities of the real estate market as well as Encouraging clients to make the most of today's real estate climate. Whether buying or selling, see what it's like to work with a professional who really is Smarter. Bolder. Faster. Call today!