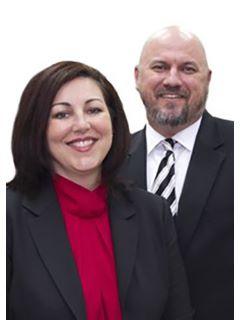 Jay and Christina were born and raised in Florida. They both graduated from the University of Central Florida and have lived and served in the Central Florida community for over 23 years.

Jay and Christina have combined experience of over 35 years in business. Throughout their career, they have been recognized for their outstanding customer service and are committed to providing loyal, honest, patient & solution-oriented support to their clients. They are passionate about real estate as they have bought and sold personal property and are seasoned real estate investors. They want to use their passion for real estate to help others who want to sell their home, find their dream home, start, or add to an investment portfolio or simply relocate to Central Florida.

Jay stays involved within the community by coaching youth sports, enjoys offshore fishing, playing golf and is an avid Miami Dolphins fan! Jay was a two-year letterman as a member of the UCF Baseball Team (1995 & 1996) and continues to support his alma mater through the UCF Alumni Association.

Christina stays involved within the community by serving on the Board of the Guardian Ad Litem Foundation for children as well as serving as a Eucharist Minister in her local church. She enjoys reading, boating, and spending quality time with her family.

Jay and Christina have been married for over 18 years and are devoted parents to their 3 children. They are excited to have joined with Century 21 Alton Clark and look forward to speaking with you about your Real Estate needs!

4 Ratings How is this calculated?
After the client and agent affiliated with CENTURY 21® Real Estate complete a transaction, the client may be asked to provide feedback to help the CENTURY 21 System and sales professionals continuously improve. The affiliated agent's Overall Rating is an average of all ratings the agent has received. The specific survey responses shown were selected by the agent and were authorized by the client for display purposes.
Locations Served:
Contact Agent

4 Ratings
After the client and agent affiliated with CENTURY 21® Real Estate complete a transaction, the client may be asked to provide feedback to help the CENTURY 21 System and sales professionals continuously improve. The affiliated agent's Overall Rating is an average of all ratings the agent has received. The specific survey responses shown were selected by the agent and were authorized by the client for display purposes.
Jay & Christina Weaver Don Reed, minneola Flor | Buyer Rating
December 2018
Upon selecting a realtor here in Florida, my agent in Michigan called several agents until she found an agent with knowledge and courtesy. And she found just that with Jay and Christina.

We only had 2 days to look at homes here in Florida. Jay and Christina made themselves available for the entire weekend. We looked at 17 houses in 2 days.

Jay and Christina in my opinion went above and beyond to make sure we were happy with our selection.
Jay & Christina Weaver Ron And Sue Jacobs, Mary | Seller Rating
April 2018
When we first decided to sell our home we were going to sell it by owner. A friend told us we should call Jay and Christina as they would be willing to assist us as we proceeded thru the process. We met with Jay and Christina and they explained what they had to offer and the difficulties in selling a home by owner. We decided that we should let the professionals handle the sell. There was no pressure from either of them to contract with Jay and Christina to sell the home. We signed a contract for Jay and Christina to sell the home and within days there was videographer/photographer at our home taking fantastic video and pics. When we saw the video and pics we both said we would buy the home but we already owned it. Jay and Christina handled everything and both were professional and knowledeable as we went through the process. We had offers on the house within days and a contract several days later. Jay and Christina got a very good price for our house. More than I was considering before I consulted with them. Through the whole process we called Jay and Christina with questions. They were prompt in returning all calls and had the answer to every question. During the process of selling our home we felt and knew Jay and Christina had our best interest at heart. I can not say enough about there knowledge and professioalism during the process of selling our home. I would recommend Jay and Christina to anyone selling their home.
Jay & Christina Weaver Cindy And Chuck Drago | Seller Rating
October 2017
Jay and Christina Weaver, Team Weaver, were with us every step of the way. It was a difficult sale due to Hurricane Irma but everything worked out perfectly. If something came up that they were positive about, they did not hesitate to call their Broker to confirm they're opinions. I personally like the honestly and personal touch they give.
* Some customers who provided a testimonial may have received a Starbucks gift card from their CENTURY 21 Sales Professional as a thank you for completing the customer satisfaction survey.